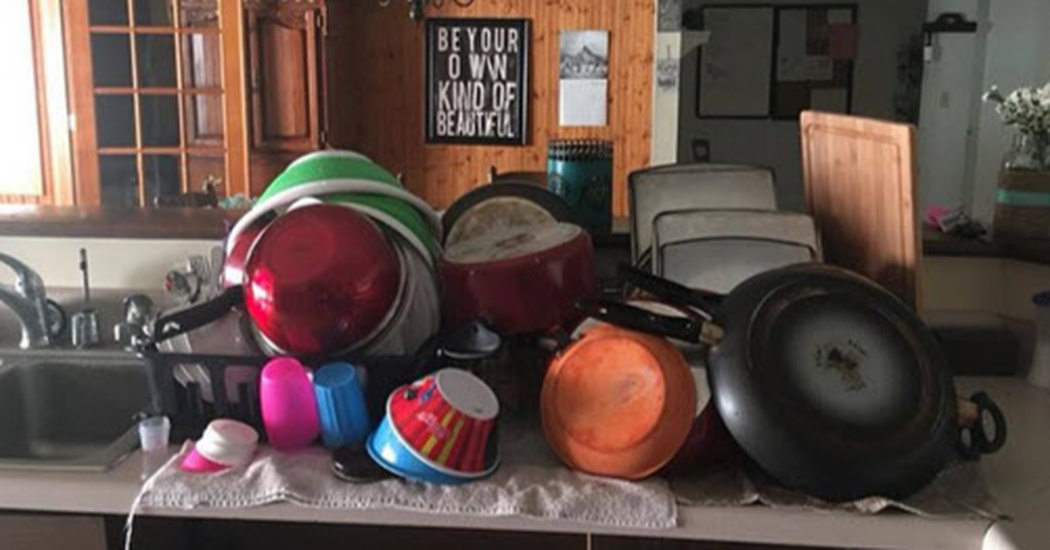 One of the most exciting times in a young parent’s life is when they’re expecting the birth of their first child. As they prepare for the upcoming event, it seems as if they do everything they possibly can to ensure that the transition goes smoothly once it takes place. At the same time, they also need to prepare for themselves for the reality of having children. Sleepless nights, dirty diapers and having your life turned upside down are only a few of the things to consider.

Health awareness has increased in recent years, including the problem of postpartum depression. Although most people have heard of it, there are very few who understand the symptoms. That includes those who may be right in the middle of it after giving birth to a child. Brittany Ernsperger wanted to share her own battles with other mothers on Facebook. It was her effort to normalize what other mothers face every day.

The message has gone viral but when you first look at it, you may not think much of it. It’s a picture of a pile of dishes that are sitting on the kitchen counter. The dishes are clean but it is emphasized that there were so many because two weeks had passed without washing any dishes.

“[Three] days ago, I sat on the kitchen floor and stared at them while I cried,” Ernsperger wrote. “I knew they needed to be done. I wanted to do them so bad. But depression pulled me under. It sucked me in. Like a black hole. Rapidly, sinking quick-sand.”

She thought of herself as being incompetent, a failure and even stupid. It also made her even more depressed.

“Throw anxiety on top of it, and you’ve got yourself a real treat,” she explained. “Being scared your husband will leave because he thinks you’re lazy. Being scared to let people into your home because they’ll think you’re nasty. Feeling like you’re failing your kids because for the 3rd night in a row you don’t have any clean dishes to cook dinner on.. so pizza it is. Again.”

“And the worst part of it all, it’s not just with the dishes,” she wrote. “The laundry, cleaning, dressing yourself, taking a shower, dressing your kids, brushing your and their teeth, normal everyday tasks. It all becomes a nightmare. A very daunting task. Somedays it doesn’t get done at all.”

Ernsperger wanted to share her experience with others because of the stigma that depression is a weakness.

“Depression is something that ‘strong’ people don’t talk about because they don’t want people to think they’re ‘weak,’ Ernsperger wrote. “You’re not weak. You’ve been strong for so long and through so many things, that your body needs a break.”

“It is so beautifully honest,” Dr. Ken Duckworth, medical director of the National Alliance on Mental Illness, told TODAY. “She puts it all right out there… and I think that is really compelling.” Duckworth also noted that the Facebook post revealed some of the lesser known symptoms of depression and anxiety – negative self-talk and not being able to complete daily tasks – bad emotions keep people stuck in an unhealthy cycle.

“People feel very overwhelmed by the demands of daily life,” Dr. Holly Swartz, professor of psychiatry at the University of Pittsburgh, told TODAY. “It is kind of a double-whammy. The depression makes it hard to get things done and the depression makes you think that you are a bad person for not being able to do them.”

She wanted to let people know that she wasn’t writing the post to get sympathy. She just wanted to inform other mothers that she understood their struggle and that somebody out there knew what they were going through.

“I’m not looking for sympathy, not in the slightest. But I am letting everyone know that I’m here for you. I get it,” she said. “If you need someone to talk to, I’m always here to help.”