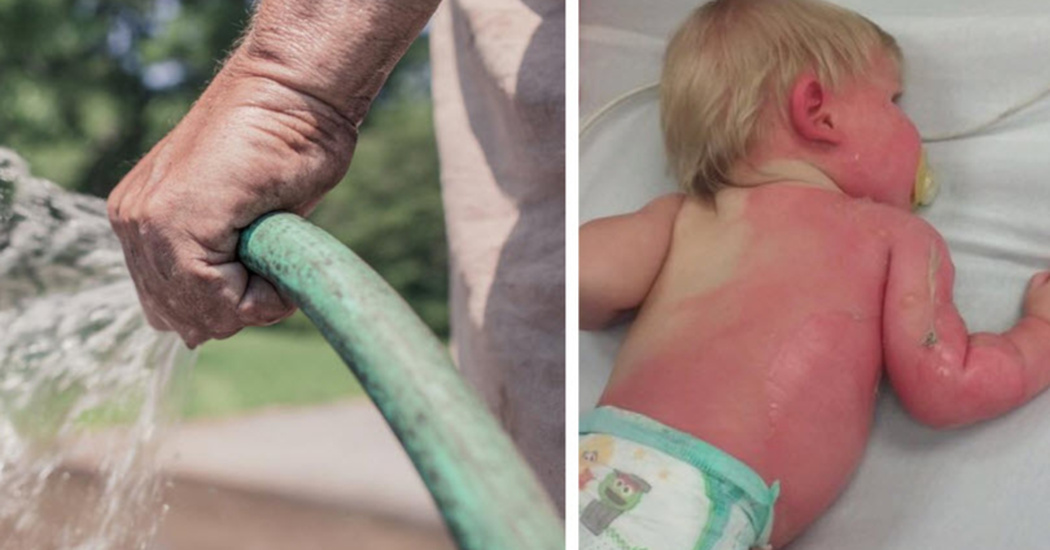 Most parents are aware of many of the dangers associated with summertime. It is a time of year when much of the family tends to go outside to enjoy some fun in the sun. It certainly is a great time of year but it is also fraught with danger, including this issue, which may be lurking under the surface. If you have children and live in a hot weather climate, this is something that you absolutely need to know. It is also something you should pass along.
It happened two years ago in Las Vegas. A family was outside and the garden hose was left out, uncoiled but it was in the direct sunlight. The water that came out of the hose was so hot that it actually ended up scalding a little baby and sent him straight to the hospital. Knowing about this danger can help you to avoid it and telling others about the possibility can help to save their child’s health and perhaps even their life.

There was a photo posted of the young child, who was blistered after being scalded by burning hot water direct from the garden hose. Those burns occurred over most of his back and his arms. In fact, the issue ended up causing second-degree burns over approximately 30% of his little body. This is almost too sad for a parent to imagine!

Nine-month-old Nicholas Woodger was out in the yard with his mother. She was getting ready to fill up a kiddie pool but when she turned on the hose, the initial blast of water accidentally sprayed directly on his back. Since the hose was sitting out in the direct sunlight, the water on the inside of the hose was probably at least 140°F. That is a substantial amount of heat and certainly enough to cause serious burns to those with tender skin, such as young children.

Here in Las Vegas, a garden hose exposed to direct sunlight during summer can heat the water inside the hose (not flowing) to 130-140 degrees which can cause burns especially to children & animals. Let the water flow a few minutes to cool before spraying on people or animals. pic.twitter.com/FMkzEt27xl

In order to eliminate the possibility of this problem occurring, the water should flow from the hose for a minute or two prior to the time that it is used for spraying either people or animals. This will ensure that cool water is flowing through the hose by the time it comes in contact with anyone’s skin.